John Greene has been torn from his World War One battle and thrown into a world inhabited by soldiers from history: Spartan, Cherokee and Viking.

The eclectic assembly of warriors, from every continent and era, form an army of Earth’s greatest soldiers and are sent on a mission to prove themselves worthy. As they travel, they develop powerful mutations that aid their survival against the strange lifeforms inhabiting the bizarre land.

John just wants to get home to his son and as the army is drawn into a major battle, he wonders if he is ready to risk his life for his new friends. But whoever brought him to this new world has fixed the rules hard: here everyone must evolve or die.

The ‘Origin Trilogy’ universe burst to life in 2018 with Unbound’s publication of ‘Darwin’s Soldiers’ which follows scores of Earth’s historical warriors plucked from their battles in a flash of light. The soldiers, ancient and modern, are thrown into a melting pot of alien armies who mutate new abilities as they fight to win their freedom.

‘Survival Machines’, the second book in the series, due to be published in 2020, explores the new world further as the victorious soldiers discover how they were brought to the bizarre world and how they are mutating.

In the final book, ‘Origin Wars’, the surviving soldiers are immersed in a galactic-wide war between a faction intent on modifying life on every habitable planet – and those wanting life to take its natural course. In their search for who took them from Earth, the soldiers discover the truth behind our species’ evolution and the fate of our galaxy. 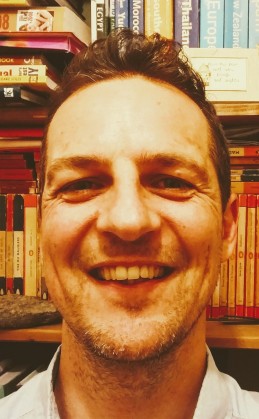 Ste Sharp was born in the hottest summer on record and would still be a Scientist if it weren’t for an odd dream whilst camping in the Australian outback, which set him on a writing path.

His novels follow ordinary people on extra-ordinary journeys as they venture beyond the boundaries of regular life to distant worlds and forgotten pasts. Science-fiction and history blend seamlessly in various works which have ultimately led to the creation of The Origin Trilogy.

Ste has melded evolutionary theory and archaeological research to create the first book, Darwin’s Soldiers, which follows historical warriors brought to a world where evolution is on speed – the start of their exploration of the evolution and manipulation of life across our galaxy.

Ste lives in Suffolk with his wife, two sons and a deer-infested allotment.